Imagine how novel it would be to see a Muppet-style puppet as Master of Ceremonies or compère, humourously guiding guests through a corporate event, product launch, wedding reception, film festival or awards ceremony! 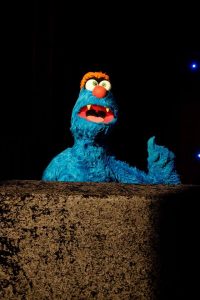 If you can remember the furry puppet alien ALF from the 1980s sitcom, or characters from various movies starring The Muppets, you might start to get an idea of how a puppet MC / Compère could work in a real life situation.
In the world of film and TV, characters like ALF, Fozzie Bear and Cookie Monster live their lives in a world where humans and puppets co-exist. It’s quite common to be served at a store by a puppet, or to attend an event where characters like these are the hosts. Nobody bats an eyelid in that world, but you will! Because we’d like to bring this whimsical concept to the real world – just for a night!

You can have a witty, wise cracking furry monster hosting your event, introducing performers and speakers, and generally keeping things moving, just as a human emcee would do. What a unique host!
Most people choose Troggg the blue monster as their MC, but you may wish to choose Moss the green monster or Flossy the pink monster also. Photos of your puppet MC choices below, with information and pricing. 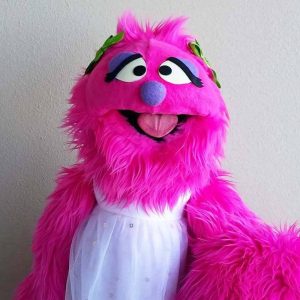 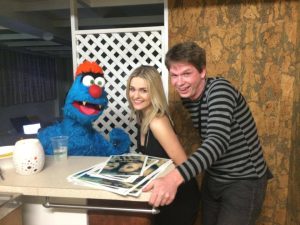 Like any human emcee, we’ll keep everything and everyone to time. We don’t want the event or the speakers to drag on and run overtime.
We’ll make sure we have sufficient information from you on all the relevant people, what they’re meant to be doing and when. We ensure that titles and protocol are correct for all the duties including the introductions, making a toast, etc. 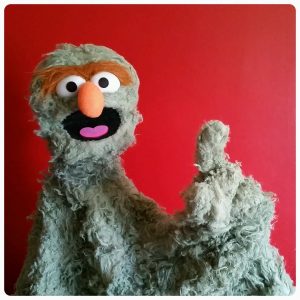 That same sense of whimsy and happiness created at our birthday party puppet shows can make your corporate event, annual general meeting or function a delightfully memorable one.

And then the remaining $225 can be paid in cash on the day of the event, or via direct deposit. Details of Payment Methods here.

Puppeteer arrives about 40 minutes before the event’s starting time (or earlier as per your specific request) to set up the lectern or table, sound equipment, scripting, run sheet, and the puppet host. The puppeteer will perform up to 4 hours of MC duties followed by an opportunity for guests to meet, mingle and grab a photo opportunity (or selfie) with Troggg, Moss or Flossy. The puppeteer then packs up all the equipment. 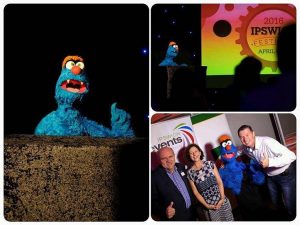 As MC, Troggg has hosted the 2016 Ipswich Festival Media Launch (which included introducing Mayor Paul Pisasale to the stage), the premiere screening of “I Am Big Bird” at Event Cinemas Myer Centre, The Hills Carnivale, the Brisbane Backyard Film Festival, the Griffin Community Christmas Carnival, a screening of “The Muppet Movie” at New Globe Theatre, the R.O.P.E. Annual General Meeting, and various other events. 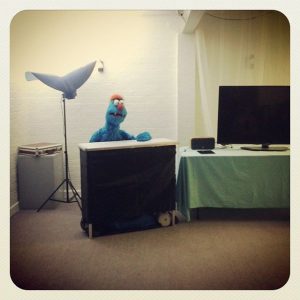 We are fully insured, professional, and punctual. 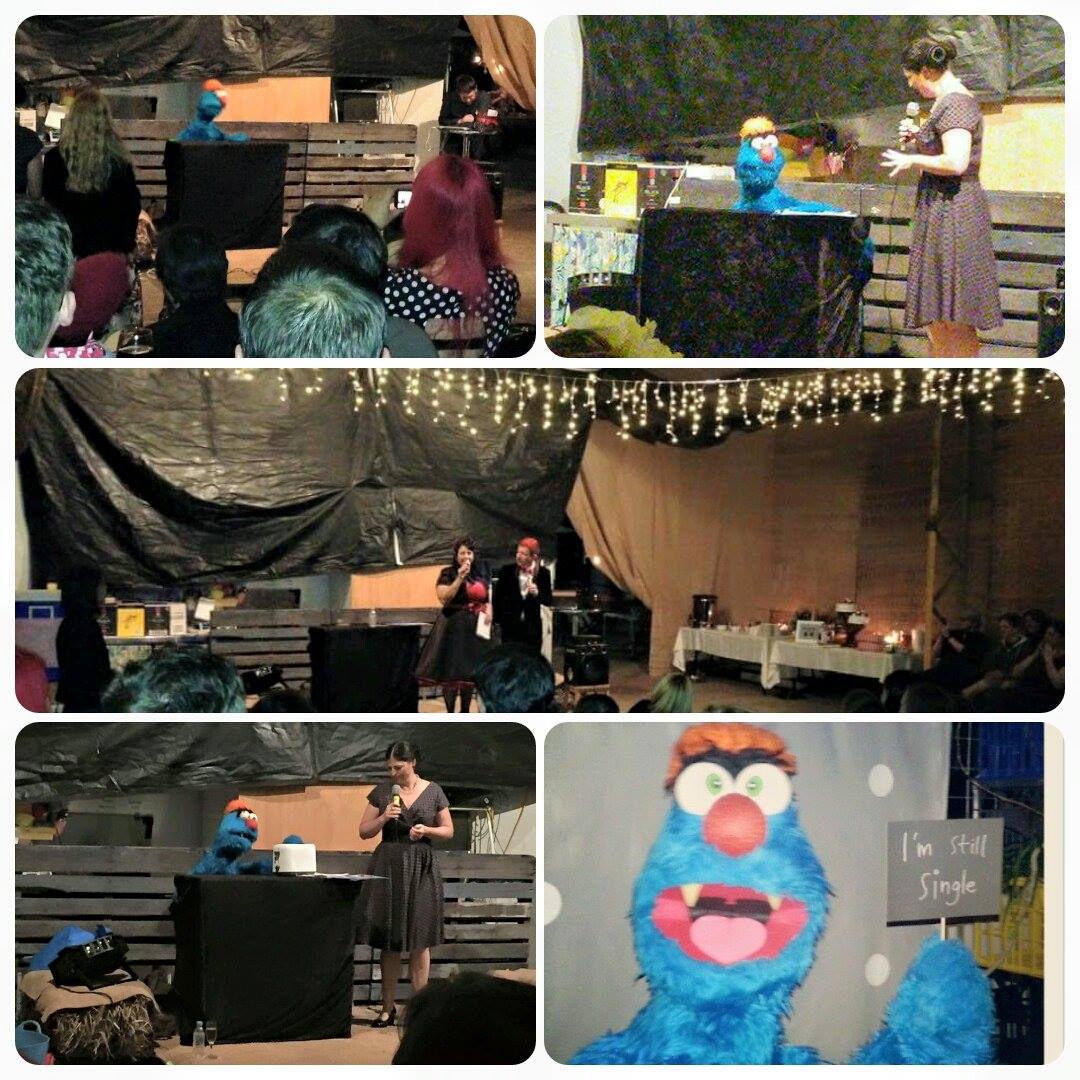 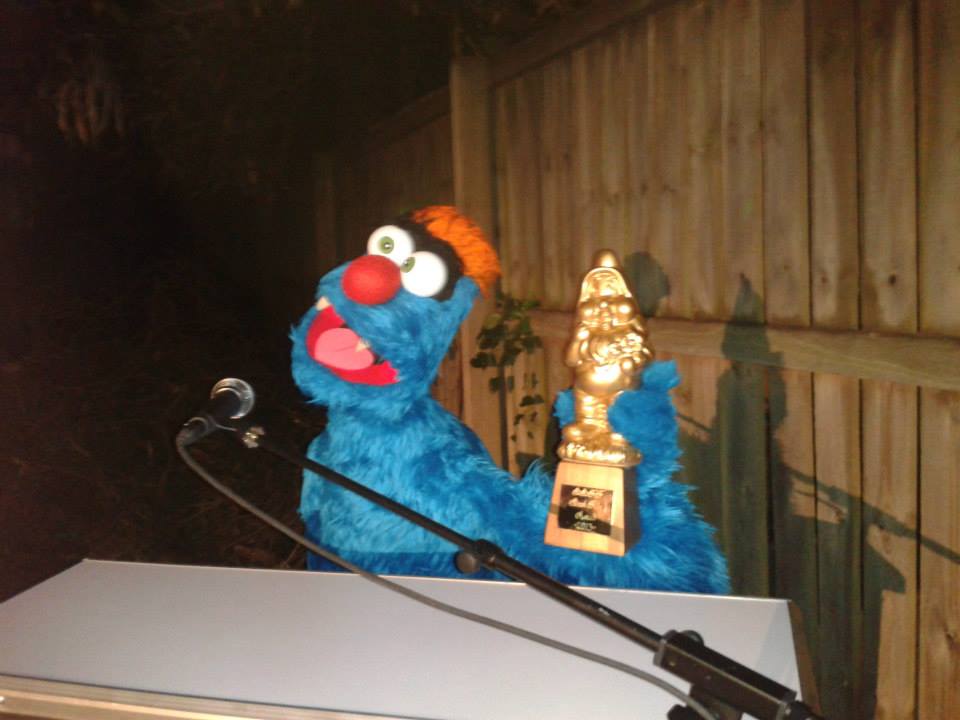 “How good was Troggg? Big thanks to Brett Hansen from Larrikin Puppets for being our very entertaining MC for the night. Having a puppet MC made our unique festival even uniquer!” – Gregory Kelly, 2013 Brisbane Backyard Film Festival.

For more information on grown up puppetry performances Brett has been involved in, please refer to the drop down menu items about corporate events, party puppet shows for grown ups and our comedy theatre production, Thank Troggg You’re Here: A Puppet Impro Spectacular! Brett was also a puppeteer cast member, and puppetry consultant with Brisbane Arts Theatre’s production of Broadway’s Avenue Q (trailer here), and worked on film projects Cluck: The Web Series and Heart of a Thousand Souls.