Skip to content
This is our premium corporate entertainment offering chock-full of rollicking laughs for an adult audience. A co-production between Larrikin Puppets and Edge Improv, Show Of Hands is a comedy variety show that combines short-form improvised theatre scenes (think Whose Line Is It Anyway?) with puppetry in the TV style of Jim Henson (The Muppets, Sesame Street). No two shows are ever the same!

Show Of Hands is a live theatre performance that features five puppeteers, a musician and lots of exciting tech.

If you love the sound of something super special for your adult audience, contact us now to discuss details.

Duration 90 minutes or 2 x 45 minutes with interval or other proceedings between.

Show Of Hands enjoyed a successful season in May/June 2018 at Food Connect Brisbane (Salisbury) as part of the Anywhere Theatre Festival.
This is a full cast production with a lot of challenging technical wizardry behind it. The show can be performed in theatres, cinemas or halls, preferably with seating. An inbuilt movie screen is always a bonus too.

If you’re a theatre, theatre festival, comedy festival or corporate event wishing to book this show, we’d be happy to discuss dates, details and rates. See below for credits, video links, a review, and thank you mentions to all the donors in our initial crowd funding campaign.

In 2018, Show Of Hand ran for a season as part of the Anywhere Theatre Festival. A big thank you to all our crowdfunder supporters who helped make it happen. Below is some historic info about the show.

Puppetry direction by Brett Hansen: Puppeteer Brett Hansen has performed and trained in the USA with Jim Henson puppeteers from Sesame Street and The Muppets, with most of the training in monitor puppetry for film and TV. His business Larrikin Puppets has been delighting audiences since 2012, and has included live performances at Woodford Folk Festival, the Puppetry Arts Festival of Brooklyn (NYC), the Mary Poppins Festival (Maryborough), and a corporate puppet show at QPAC for the cast and company of the Julie Andrews-directed My Fair Lady. Brett has worked on three stage productions of Avenue Q, and on TV productions such as The Bureau of Magical Things (Jonathan M. Shiff Productions/Network Ten), Totally Wild (Network Ten), Juiced TV (Children’s Hospital Foundation) and pop star Tia Gostelow’s That’s What You Get music video.

Improv direction by Brad Daniels: Brad Daniels started training and performing improvisation in 1994 to forget a girl and has been working constantly in the field since then.
In the last 17 years Brad and has appeared in and produced innumerable shows – with Theatresports Queensland, Six of the Best, Sit Down Comedy Club, ImproMafia, and his own troupe EDGE Improv. Brad also had a regular radio spot on 4ZZZ, performing impro on Friday afternoons. Brad loves the challenge of running the workshops. He has also directed and starred in many improvised productions, including the sold out and critically acclaimed “Hard Boiled Dick” as part of the Brisbane Theatre Fringe.Brad has also performed and taught impro in locations as diverse as the Adelaide Fringe Festival to Singapore to Bingara in rural NSW.
https://www.instagram.com/p/Bi6eNBrHMQy/?hl=en&taken-by=brisbanestage

Technical direction by Elissa Jenkins: Brett Hansen’s wife and assistant puppeteer Elissa Jenkins has a 20 year career in media, marketing, communications and management. She has received puppetry training in New York City, and joins Brett for festivals, touring shows and puppetry workshops. For this production, Elissa wrangles the tech that connects the puppeteers to a TV frame and a movie screen, and keeps it all in sync. She also directs the puppeteers in their relationship with the tech.

Producer: Daniel Endicott: Daniel is an Australian theatrical technician and puppetry enthusiast who has spent much of his 30 year career working with independent musicians and variety performers, whilst also helping to save many of Brisbane’s heritage theatres and cultural icons under the Odyssey banner. Daniel has moved into the area of production management working with Supercell Festival of Contemporary Dance, Ballet Theatre of Queensland (“Cinderella”, 80th Anniversary Gala Performance, “The Little Mermaid”), Dangerous Song Blue (national tour), Room to Play, Metro Arts Theatre and Vulcana Women’s Circus. Daniel currently works as a stage technician at Queensland Performing Arts Complex (QPAC) and runs Odyssey Entertainment, which provides production management, technical support and equipment to our emerging professional artists, smaller to medium arts companies and our community arts venues. Daniel and Odyssey are looking forward to working with the Edge Improv and Larrikin Puppets team to present a hilarious improv puppet fiasco, “Show Of Hands” as a part of Anywhere Theatre Festival 2018. 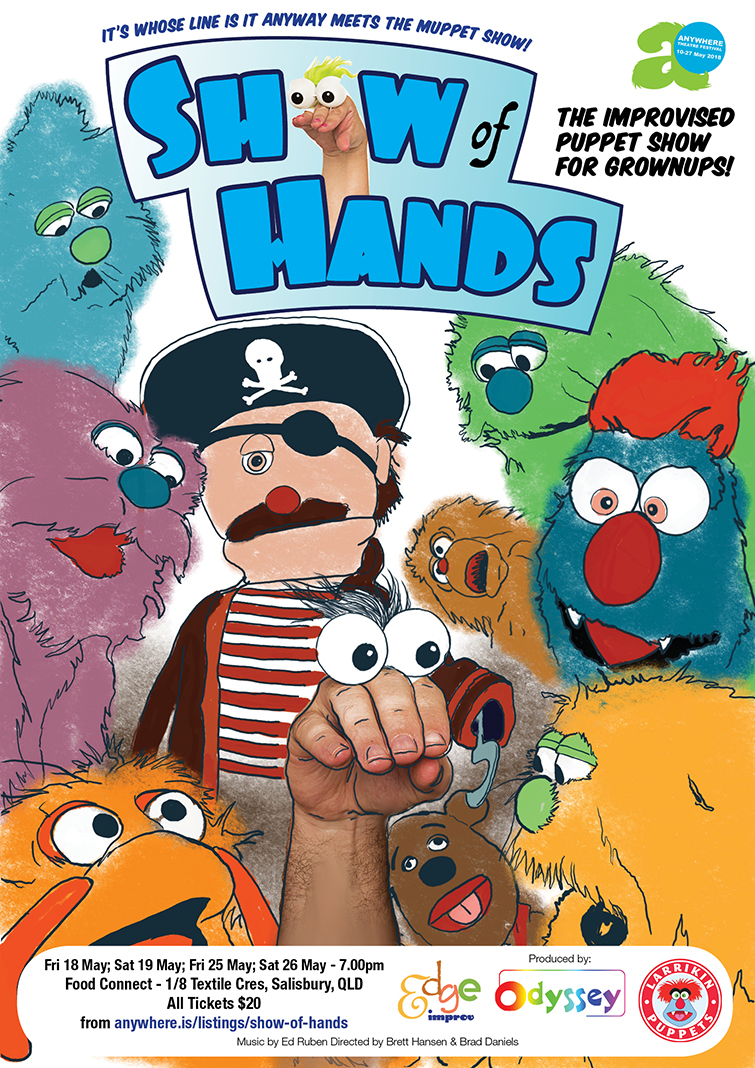 Here’s a review of one of the performances on Brisbane Stage:
https://www.brisbanestage.com/single-post/REVIEW-SHOW-OF-HANDS-ANYWHERE-THEATRE-FESTIVAL-2018

Like “Whose Line Is It Anyway” meets “The Muppet Show”, this technically intriguing show is performed using monitor puppetry (a television format developed by Jim Henson). Improvising puppeteers perform short scenes, songs and games into a video camera.

Hosted by “Troggg” the blue monster, this is two shows in one; puppeteers performing live on stage, with puppet characters projected onto a large screen. The audience is encouraged to contribute suggestions for the puppet characters to play out. A similar format (called “Thank Troggg You’re Here“) was previously performed by the same team as part of the 2014 Anywhere Theatre Festival.

Our Chuffed crowdfunding campaign has finished. Thanks to the following people for donating: 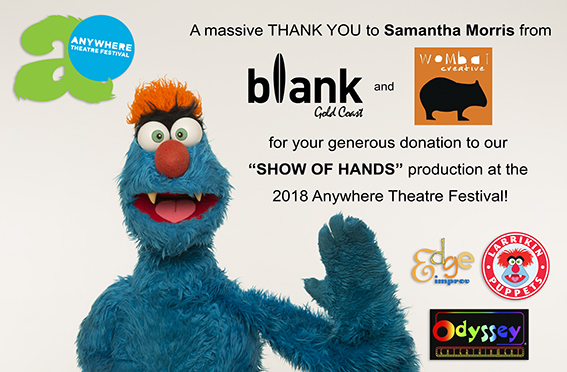 A massive THANK YOU to Samantha Morris from Blank Gold Coast and Wombat Creative for your generous donation to Show of Hands! 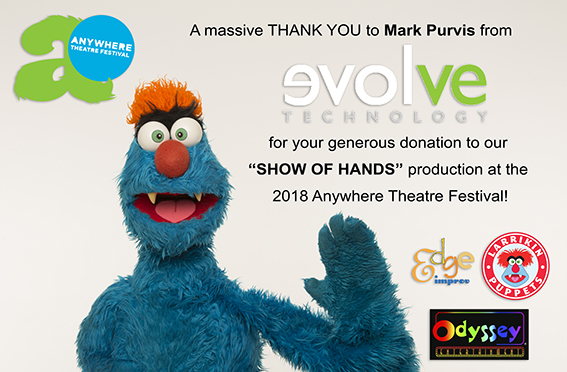 A massive THANK YOU to Mark Purvis from Evolve Technology for your generous donation to Show of Hands! 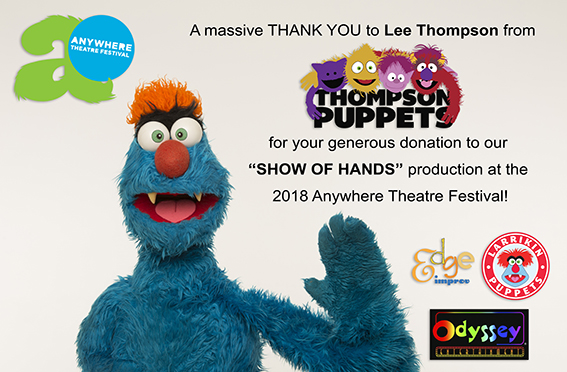 A massive THANK YOU to Lee Thompson from Thompson Puppets for your generous donation to Show of Hands! 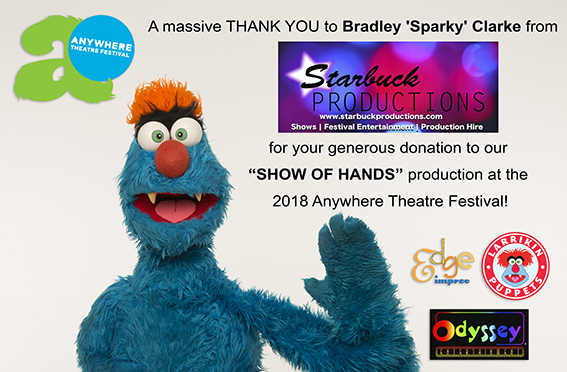 A massive THANK YOU to Bradley ‘Sparky’ Clarke from Starbuck Productions for your generous donation to Show of Hands! 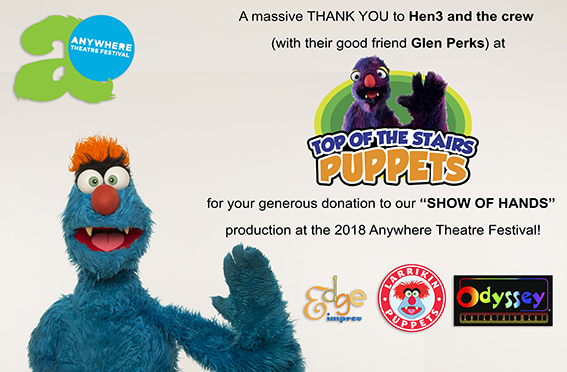 A massive THANK YOU to Hen3 and the crew (with their good friend Glen Perks) from Top of the Stairs Puppets for your generous donation to Show of Hands!
https://youtu.be/qB4Xgqm-W94
Troggg’s video thank you to the puppeteers (so far) who’ve generously donated to our Show of Hands crowd funding campaign. 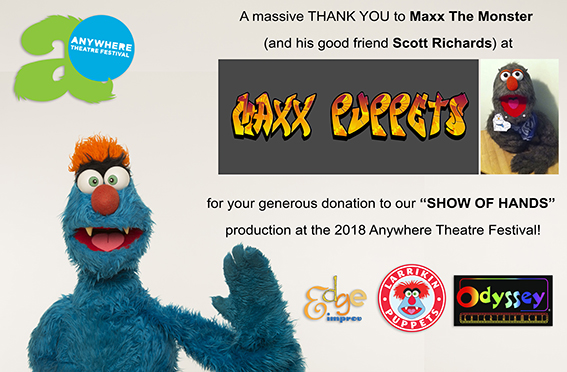 A massive THANK YOU to Maxx Monster and the crew (with their good friend Scott Richards) from Maxx Puppets for your generous donation to Show of Hands! Here is your shoutout video as well:
https://youtu.be/080VBQGY6fk 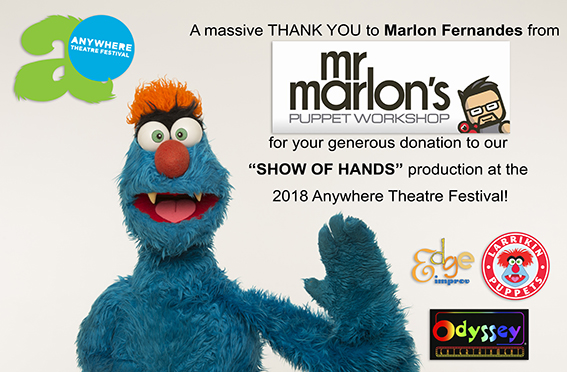 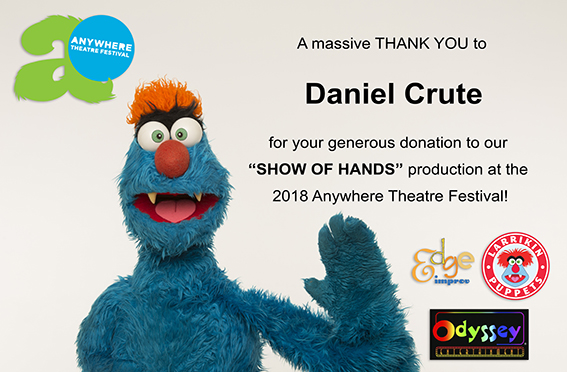 Massive THANKS to Daniel Crute for your generous donation to our crowd funder for “Show of Hands” at the 2018 Anywhere Theatre Festival! 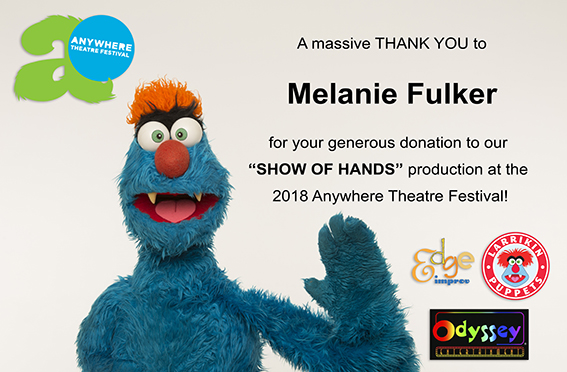 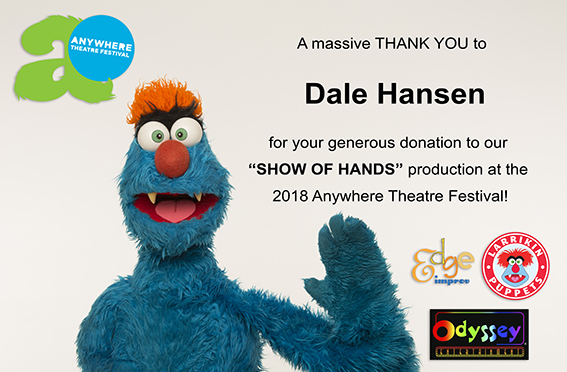 Massive THANKS to Dale Hansen for your generous donation to our crowd funder for “Show of Hands” at the 2018 Anywhere Theatre Festival!
https://www.youtube.com/watch?v=Sf0cABdpNCA

Massive THANKS to Robert Jenkins for your generous donation to our crowd funder for “Show of Hands” at the 2018 Anywhere Theatre Festival!
https://www.youtube.com/watch?v=9NbE-mIANME&feature=youtu.be

Massive THANKS to Kate Walton for your generous donation to our crowd funder for “Show of Hands” at the 2018 Anywhere Theatre Festival!